Steve Patterson | Host of The Fishing Show | 94.7 The Pulse 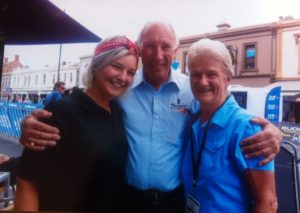 Q. If you could have any job for a day, what would it be? A. Can't think of any as I've been happy with what I've done. Q. What's your favourite food? A. Roasted Chicken Salad Q. If you could have any three people to dinner, awho would they be?  A. my cousin Meryl Streep, Keith Urban, Troy Cassar-Daley Q. If you could meet anyone who has passed away, who would it be and why? A. Elvis because I love his music Q. What's your best advice for people interested in working on radio? A. Be ready for the unpredictable, enjoy, smile to engage the listener.

Anjelika Butler | Host of The Bicycle Show | 94.7 The Pulse

Heather Howard | Host of The Bicycle Show | 94.7 The Pulse

Ian (Hoges) Hogan I am a lifetime Geelong resident with Geelong born parents. I grew up in Geelong West attending Ashby Primary and Geelong West Technical school in Herne Hill. A fitter/toolmaker by trade, I have worked in various tool rooms and factory maintenance workshops until the 1980's and since then I have worked in transportation. I have loved music all my life and I've played bass guitar in various bands for many years. As a teenager, I developed a love of radio and spent countless hours at the studios of the now defunct 3GL. David Coburn (3GL's chief announcer) got me interested in 'Old time' music with his program (the original) SWEETHEARTS OF YESTERDAY. I developed my radio skills at Country FM where I did everything from On-Air presenting, Outside Broadcasts, Production and Management duties. I joined The Pulse in the 90's doing the country music program as well as the studio side of Football and Cricket broadcasts and sharing the old time music show with the "Legendary Bob Appleton." When the opportunity arose at The Pulse, I developed my own version of the late David Coburn's program naming it SWEETHEARTS OF YESTERDAY in his memory and using his voice in the program's identification tags each week. In keeping with the 'old style' music, as well as being an old fuddy-duddy, I don't have any social media connections. 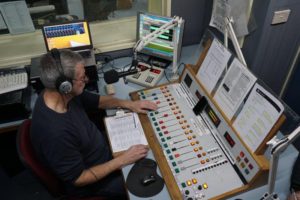 Q. If you could have any job for a day, what would it be? A. Hosting a midnight to dawn music request show on commercial radio. Q. What's your favourite food? A. Sausages, mashed potato & peas. Q. What's your favourite band? A. The Eagles Q. If you could have any three people to dinner, who would they be?  A. Joe Walsh, John Farnham, Barry Gibb Q. If you could meet anyone who has passed away, who would it be and why? A. Karen Carpenter because she had the best voice I’ve ever heard. Q. What's your best advice for people interested in working on radio? A. Pursue your dream of working in radio but don’t let your ego get in the way. Q. What event, festival or service would you being to Geelong? A. An Eagles concert Q. What song is your guilty pleasure? A. “Chain Reaction” by Diana Ross